Abraham Benjamin de Villiers (AB de Villiers completes his 200th six in IPL at 3rd game of this seasonbetween Royal Challengers Bangalore and Sunrisers Hyderabad. Now the total no. of sixes by ABD in his IPL career is 201. He made 51 runs at just 30 balls.
SRH had won the toss and decided to bowl. RCB gave target of 164 runs, in which Devdutt made 56 runs of 42 balls. But SRH made 153 runs in 19.4 overs and were all out. Jonny Bairstow made 61 runs of 43 balls. 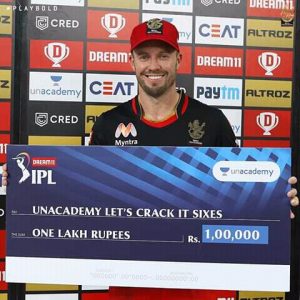 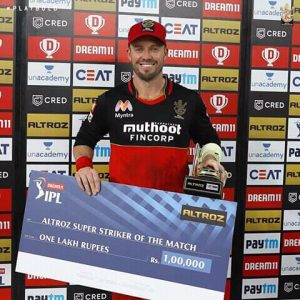 ABD was declared as winner for UNACADAMY LET’S CRACK IT SIXES and ALTROZ SUPER STRIKER OF THE MATCH.