Tsang Yin Hung known as  Ada from China, Hong Kong has set the new world record to become the fastest woman climber who has climbed Mt Everest in less than 26hrs.

According to Gyanendra Shrestha, liaison officer at the base camp, Tsang Yin Hung started her ascend at 1:20 pm on Saturday and reached the Summit at 3:10 pm on Sunday afternoon. She climbed to the summit in 25 hours and 50 minutes. Woman climber Tsang Yin Hung breaks the world record for fastest Everest climb-2021, according to Dreamers Destination Treks and Adventure Pvt. Ltd, an expedition company.

Hung had recently endeavored to arrive at the summit on May 12th. She needed to get back from 8,750 meters because of high wind velocity and nonstop snow.

Tsang Yin Hung was so exultant to fulfill her dream after surviving the earthquake on Everest. After climbing Mt Everest she was fascinated with the mountains and again summited Mt Everest on May 22, 2019. 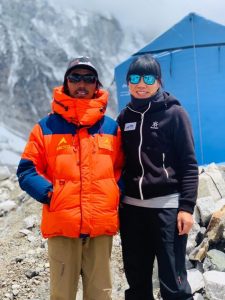 She feels that mountains give energizing and positive thoughts along with keeping a person humble and blissful. “People used to say you are so strong, but I never thought I am so strong,” she said, “Mountains are so strong”.

In her opinion, one cannot battle and challenge the mountains. The only thing one has to take care of is ensuring that in the mountains, the natural phenomenon should be favorable to the climber.