The company on Monday said it has launched NTORQ 125 SuperSquad Edition scooter, inspired by Marvel’s Avengers in Nepal.

TVS Motor Company has launched a new SuperSquad edition of its 125cc scooter, the Ntorq 125, in Nepal. This is a special series of the Ntorq 125 which has three different color variants – Stealth Black, Invincible Red, and Combat Blue. Notably, this model was launched in India in the last week of October 2020.

The names of these color schemes convey the characters they depict. The Stealth Black model portrays Black Panther, the Invincible Red shade is inspired by Iron Man, while the Combat Blue trim comprises of Captian America-themed graphics. TVS has bestowed all three paint schemes with an ‘A’ logo on the front panel, log shield, and below the instrument cluster. 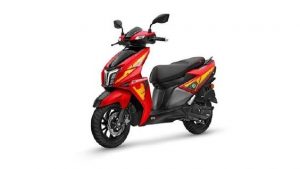 The SuperSquad version stays indistinguishable from the Race edition of the Ntorq 125 altogether different perspectives. It comes furnished with a Bluetooth-empowered LCD console which, other than blending with the rider’s smartphone, shows a plethora of information. It additionally gets a full-Drove headlamp and tail light and an enormous 22-liter under-seat stockpiling. Fueling the Ntorq is a 124cc, three-valve motor which produces 9.1bhp and 10.5Nm.

Bhagrathi Bhatta's rape and murder case now has a suspect