A Nepali PUBG Mobile streamer, Pawan, better known as ‘4k Gaming Nepal’ on Youtube and Facebook has succeeded in amassing over 500k subscribers on Youtube. This is a huge feat for people in the Nepali gaming community. His daily live streams always gather a crowd in thousands and the love and support that he receives is tremendous. His commentary over his gameplay makes the stream much more lively and entertaining.

Pawan’s Youtube channel was created on October of 2017, however, he started to live-stream his PUBG gameplay since May of 2018. Till date, his channel has 29.3 million views and his most popular video has been watched over 450k times by his audience. When you think about how big PUBG:Mobile has gotten among the Nepali youth, one might even consider those to be rookie numbers. However, having amassed over 500k subscribers in a span of two years, I am certain he will continue growing and put our nation on the gaming map. 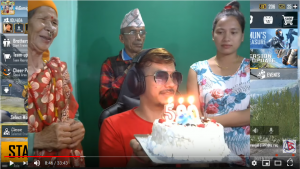 He streamed his 500k subscribers special celebration video on September 13 and within a span of 21 hours as of right now, it has already gathered over 267k views. His videos are equally liked, shared and followed on Facebook however his Facebook page has a considerably lesser interaction with 87k likes. In the picture, you can see him with his whole family and how proud his parents are of him. The whole Nepali gaming community can be proud of him and grateful to him for entertaining us with his videos, especially during such a pandemic.

Pawan plays PUBG:Mobile in his PC via an emulator. According to his Youtube channel, he owns a 4k monitor 32″ inches which I am guessing must have played a role in him choosing his Youtube name. It only took him 20 days to reach 100 subscribers and the rest, as they say, is history. A substantial amount of people criticize his gaming skills as well as his credibility as a PC gamer given he uses an emulator; however, the love and support he gains for his entertaining commentary skills and connect with his audience simply cannot be ignored.

Black hole, what actually it is and the mysterious facts about black hole