With Tesla Inc. hitting new records in widening avenues, Elon Musk has seen his stars shining high like never before. lifted by surge in Tesla shares price, His net worth has skyrocketed to a whopping 127.9 billion USD. The 49 year old Tesla entrepreneur has swept Bill Gates off his perch to be the second richest man.

As Tesla is widening its avenues that include groundbreaking Space X and Space Exploration Technologies, it has seen its popularity and market value soar over the years. Elon Musk has now toppled former CEO of Microsoft who sat there for several years over the success of Microsoft and his vaccine investment before being unseated by the Amazon tycoon.  Although it can be argued that Bill Gates value would have floated far better had he not chosen the path of philanthropy. He has donated more than 27 billions in donations already to his namesake foundation since 2006.  As for now he would stand at third with 127.7 billion USD.

Often controversial due to his tweets, Elon Musk may breathe a sigh of relief and even pose a to go one up above Gates who refused to hold him in the same esteem as former Apple CEO Steve Jobs a few weeks ago.

Elon Musk now stands just behind Amazon chief Jeff Bezos at 181.4. in the Richie-rich ranking but with Tesla becoming more and more profitable and gathering financial momentum because of electric cars, and space adventures, it may be sooner than later that we see him on top. 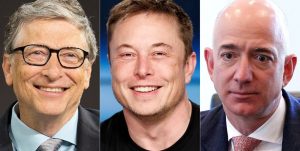