The government faced a lot of criticism from migrant workers and Nepal’s embassies abroad for a limited daily quota of passengers to fly into Kathmandu. So, the government is allowing more daily flights to clear the backlog of passengers stranded for 6 months.

Although the quota for repatriation flights had come under fire for being inadequate, impractical, and driving up airfare by up to five times. But due to lots of jobless Nepali workers stranded in different countries for the past six months demands to make the government to allow more flights daily.

“As long as passengers have PCR negative reports, airlines will be allowed to conduct any number of flights, but the passengers will have to stay for two weeks in home-quarantine,” Tourism and Civil Aviation Minister Yogesh Bhattarai said in an interview on Thursday.

The government had allowed 10 international airlines to restart limited regular flights stipulating that only 500 passengers would be allowed daily on Sep 1. But the number is increased to 800 this week. Bhattarai said that the daily quota for arrived passengers now would be raised to 8000 daily.

However, only Nepali citizens are allowed to fly to Kathmandu for time being where “No tourists are allowed”.

The government is also getting the labor Minister and embassies to strengthen coordination and expedite the repatriation of stranded workers who need support for their return using the “Foreign Employment Welfare Fund.”Minister Bhattarai also told that the government was preparing to allow domestic flights from 1st October which was twice postponed after a surge in COVID-19 cases since mid-June in a webinar organized by “Society of Economic Journalists of Nepal”. 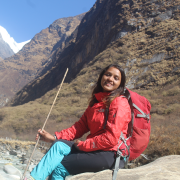